A story just from John:

A week after landing in Johannesburg we were back on a plane on our way to travel from Port Elizabeth to Capetown on the “Garden Route”.

After a quick stop in Port Elizabeth, we hopped in our rental “the Picanto” and headed for Jeffery’s Bay, home to one of the most famous right hand breaks in the world, “Supertubes”.  When we pulled up to our place, the name was more than fitting, Dreamland.  Our studio suite had a partial ocean view, comfortable bed (always a plus) and included a small kitchenette.  We were quickly greeted by the owner, Thomas, who was a weathered surfer through and through.  Right away when he heard I was from Oregon he started asking me names of surfers who had stayed with him from Oregon. Unfortunately I didn’t know any of them.  Besides that he was incredibly excited to tell me about the surf.  A nice big swell had just hit with offshore winds–it couldn’t

have been more perfect.  So after watching the massive waves for the afternoon I decided that I couldn’t miss out on surfing at this amazing place.

The next morning I was all set up with a board and suit and headed out to check out the surf.  Thomas told me that it would be a little smaller down at a break called “The Point.” It had been almost four months since my last time out and having less experience on point breaks, I figured this would be best.  After standing for 20 minutes chest deep in water waiting for a break in the set to get out, I saw my chance.  I started paddling hard and pretty quickly realized how long it had been since I had been on board, but this didn’t deter me.  I kept paddling and was close to getting past the breakers when my luck changed and a set was rolling in.  This was not a normal size set and after the second 4 foot overhead wave came down on me, in my tired state I broke a cardinal rule of 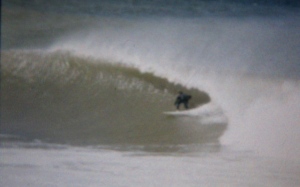 surfing… I let go of my board to make it through the wave.  This normally wouldn’t be a big deal but as I felt the board pulling like a fish on the line, all of a sudden it broke loose.   So now I am four months out of shape, sitting in unfamiliar water, no board and not exactly sure the best way to get in.  I was pounded by probably three more waves till there was a small break for me to think.  I then saw another surfer paddling out and asked what he thought the best way for me to swim in would  be.  To my surprise he asked if I wanted him to paddle in with me. Considering the situation described above I immediately took him up on the offer.  So with him paddling on his board and me holding on to his leash kicking in tow we made our way to shore.  He probably saved me an hour or longer swim back.  I felt a 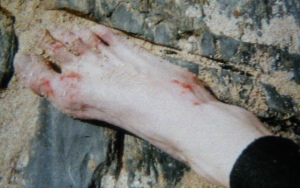 The consequences of no booties and sharp reef

little foolish as we got to the land but he said the same thing happened to him two weeks earlier so he knew how it felt.  We then walked up the shore to see if we could locate my board, which we did find being repeatedly slammed into the rocks.  This is something that makes any surfer cringe to see.  When I brought the beat up board back to Thomas he said I would have to pay the damage which I was expecting but the part I wasn’t expecting was it to only cost $35 with replacing the leash.   At home the amount of damage done would have easily been $150 dollars or more.  He said those things happen and that he had another board for me to get out and enjoy the surf.

Reluctantly I tried again that afternoon as the swell had settled a little. After catching a couple really nice rides I paddled in as there were about 20 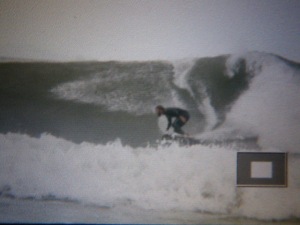 guys fighting for the same peak.  The next day I went back out and after a couple of failed attempts to get out past the breakers, I had three hours in the water with four other guys.  I surfed until my arms were ready to fall off and finally came in.  What started out as one night (due to time) in J’bay turned into three nights and three beautiful days.  We would have stayed longer but we only had five more days to see the rest of the Garden Route.  Can’t wait to come back here when I am in better paddling shape.

This entry was posted in Around The World, South Africa. Bookmark the permalink.