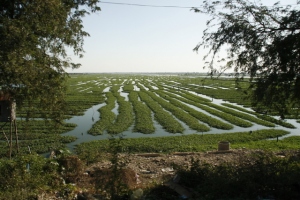 Our second week in Phnom Penh, Cambodia was great fun. Although we were tired by the end of each day, our students learned a lot and were, overall, a good class. Among other things, we taught them a few songs from home and on Sunday we sang with them at their church. John was a patient teacher and they love singing along with him and his guitar. Throughout the week as the girls were around we would hear one spontaneously break into, “Be bold!” and a small group echo, “Be bold!” and then continue singing the song. Those moments brought big smiles to our faces.

If you read our last post you saw a typical day in the life last week and that stayed pretty consistent through the week. On Saturday we met up with Laurie and Michelle to see more of the sights. We went off the beaten path and had an experience few tourists probably get. The 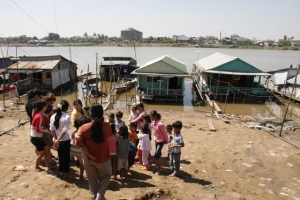 Mekong River is a life source for millions of people and flows from the Tibetan Plateau to the South China Sea. We have been interested in the Mekong since we saw a short documentary called “Exploring the Mother of Waters” at the Banff Film Festival a couple of years ago. This documentary highlighted a man’s journey as he went from source to sea, exploring the impacts of mega dams on the environment and culture of the river and it’s people. There are floating villages along the rivers edge where some of the poorest people of SE Asia live. The water is used for washing, cooking, cleaning, fishing, and even as a toilet. Every time Laurie and/or her husband, Carl, come to Phnom Penh they make a trip out to the river’s edge with fruit to pass out. We were invited to come along and help distribute. When we arrived we learned that many of the people had to move from their homes on the river so there weren’t nearly as many folks as usual, but those who were there seemed to really appreciate the fruit and they all came 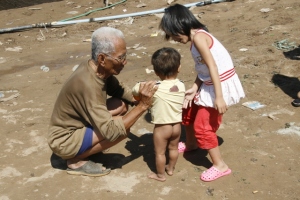 away each with a good amount of oranges and Asian pears.

After lunch on Saturday, we ventured to a popular tourist attraction known as, “The Killing Fields” (considering the name it doesn’t sound like a real great post-lunch activity, but it was good =)). We have been learning about the reign of the Khmer Rouge in the late 70s during our time here and this is a place where many lives were taken. We won’t get into the details now, but are processing everything we are learning and will post at a later date with something more thorough. Erin is reading a good memoir of a girl/now woman who experienced those years firsthand. If you are interested, it’s called “First They Killed My Father” by Loung Ung.

Week three did not begin as we anticipated. We both started feeling crummy on Sunday, John spent part of his night in the bathroom, and Erin spent hers sleeping in the fetal position. We 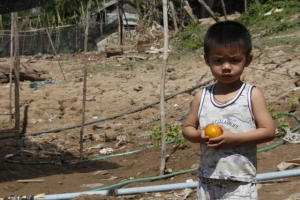 gauged ourselves throughout Monday morning and when we figured out John was running a fever (he referred to this as his body’s way of being a “self cleaning oven”) we decided to call in sick. Kind of a funny thing to do when you are technically on holiday, but the last thing we want to do is infect the kids. We have noticed improvements throughout the day and are hopeful to be at a good functioning level tomorrow. We have been blessed to have pretty good health the majority of our travel so far and have known it was coming. This really isn’t even bad and we aren’t looking forward to the day we have to take the pills for amoebic dyssentry with which our team doctor sent us off.

This entry was posted in Around The World, Cambodia. Bookmark the permalink.

4 Responses to Songs, Sights, and Sickness