The Northland and Beyond

Posted on October 24, 2008 by jemacy
**This post was written October 23. We have been trying to post this for several days and have run into quite a few internet snags along the way. So, here’s your catch up post…**

We are on our last day north of Auckland. Just a short update on what we have been up to. After the sulphur baths we headed up north to where the Tasman Sea and the Pacific Ocean meet at Cape Reinga. This is a 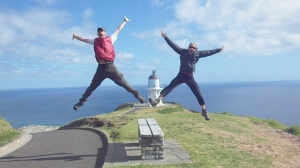 very beautiful scene and we caught it on our best day in New Zealand yet. The skies were perfectly blue and the sun was warm. We consider this our best day in NZ so far not just because of the weather, it was an all around great day. We hiked down from Cape Reinga to a nearly deserted beach (only one other set of footprints on the sand) over which we walked about 5km. From there we climbed up and over sand dunes and then finally out to Cape Maria van Dieman, another 4km, which overlooks the Tasman Sea and out to some islands. We took a seat on the nice plush grass that was something like laying back in a foot of powder, pulled out our ham, cheese, and avocado wraps and ate the most delicious meal, looking

out an incredible landscape. From there it was only natural to fall back against the grass, close our eyes, and take a nap. After an hour of sleep, we got back on the trail and hiked back to our van. In the seven hours of hiking, we saw only one other person. We finished the day driving to what the map referred to as an “informal campsite.” It ended up being a very nice campground right on the beach, minus the camp host and hot showers.

The following day was one of our longest mileage, er, kilometer, days in the car. We drove from Cape Reinga to Opononi, stopping only briefly in Rawene, to make lunch and stretch our legs a bit around the very small waterfront town. We were trying to get to Opononi in hopes of going sandboarding, which is basically boogey boarding on a sand dune into the water. We had heard great things about this unusual sport and were looking forward to giving a go. Unfortunately, the operation only runs until 2pm and we arrived at 1:30pm. Also, the price had gone up from what we had expected, making us think twice. Ultimately we decided to stay in Opononi for the night because we were tired of driving, and to skip out on the sandboarding, the logic being we have dunes and boogey boards at home and could surely figure it out on our own. We’ll be heading straight to Pacific City when we get home to give sandboarding a try. Let us know if you want to join us, we’ll only charge you $20 NZ dollars instead

of the local rate of $25 and throw in some Hokey Pokey ice cream to sweeten the deal (prices and offers subject to change).

Wednesday we had much shorter drive down the Kauri Coast. The kauri tree is the short, stocky cousin of the tall redwoods seen in California. We saw the first and second largest kauri trees in the country and decided to skip on the seventh largest. Who needs to see the seventh once you have seen the first and second largest? By largest here they mean tallest rather than widest girth. The trees were very impressive and definitely not similar to any type of tree we have back home. Many of the kauri trees have been logged but these few have been spared and are believed to be nearly 2000 years old. It was worth the stop to see these majestic trees, but you can only see so many big trees before you are ready to move on. And so we did, to Baylys Beach.

The two purposes of coming to Baylys Beach were to check out the surf (which was awful) and visit the Skydome Observatory to see some stars (but it was a cloudy night). Instead we took a nice walk down the beach, ate some dinner at Sharkys (we wouldn’t recommend the beer battered fries with cheese and mayo –

more mayo than cheese), and had a personal tour of the observatory. The Skydome Observatory is in the front of Deborah’s home. She is an astronomer whose goal was to provide international astronomers the opportunity to come to the Southern Hemisphere and study the sky without having to drag their equipment along and to give the public a place to see the beauty of the night sky. Like we said it was cloudy, but she showed us the high powered telescope and told us how to find some of the common constellations. We were bummed that we weren’t able to see other galaxies, nebulas, the moons of Jupiter, among other stars and planets. We did get a good mini lecture and learned quite a bit.

This entry was posted in New Zealand. Bookmark the permalink.

3 Responses to The Northland and Beyond